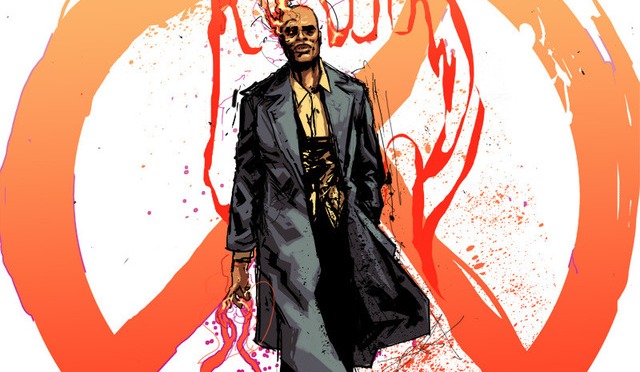 A few weeks back, while celebrating the 7th anniversary of my Local Comic Shop; I had the pleasure of talking with some local creators. One of them was one Dirk Manning, a writer with at least half a dozen books under his belt.  One of which is an actual book, WRITE OR WRONG: A WRITER’S GUIDE TO CREATING COMICS.  Since I was in a comic shop though, I bought some comics written by Dirk Manning and let me tell you I was impressed…

If we need any further proof that Indie is where it’s at, we could probably find enough evidence looking at the guys making comics right next door to us. Dirk bragged to me that his books, while being great stand-alone stories, connected to form a larger narrative. I somewhat rolled my eyes at this ; “Oh, like Bendis.  Like Geoff Johns. Like Hickman and everybody else that’s a big name now”. I say all that because, as much as I like those guys to various degrees, they all tend to be the same story repeated on a larger scale. After reading what Dirk Manning has to offer, I’m not ashamed to admit to eating crow.

His books really do stand-alone as great stories, terrific in fact. “Nightmare World Volume 1” is the best horror book I’ve read this year, primarily for how it encompasses several familiar horror genres and their troupes without feeling stale or predictable.  Dirk’s style of writing lends itself to that, most of his stories are only 8 pages long.  Believe me, you can accomplish alot more in those 8 pages than you would expect. Will Eisner’s The Spirit was at most 4 pages and delivered many memorable tales of his famous character.

If you’ve never read any of Manning’s previous books, this issue gives you everything you need to know.  Mr.Rhee is a supernatural trouble-shooter, he helps people deal with monsters, demons, ghosts, etc. He knows magic, but also how to throw a punch.  He was also cursed by a demon in his early years and been dealt some raw deals lately.

Imagine a cross between Mike Mignola’s Hellboy and Robert Kirkman’s Invincible and that’s how “Tales of Mr.Rhee” feels. It’s not full of superheroes thought out as modern creations, or a gloomy horror book full of monster fighting (but there is some monster fighting in the books). It takes the demons, the twists, and fighting of Hellboy with the inspired writing of Invincible. That’s just a pitch though, Manning’s writing is nowhere near a knockoff of Mignola or Kirkman.

As I said, “Tales of Mr.Rhee: Karmageddon #1” hits comic shelves today, and if you know nothing about the character or the preceding stories this issue tells you everything you need to know. Having read it this morning, I can tell you it’s one hell of a first issue and an excellent introduction of Mr.Rhee to the masses.

Description of the issue via tfaw: When Armageddon begins and hordes of demons invade the Earth, five orphaned siblings suddenly find themselves in the care of an enigmatic, gruff looking magician who identifies himself only as Mr. Rhee. He has vowed to protect them, but is there anywhere truly safe – or anyone truly trustworthy – when the world is ending?

If you want to read the earlier adventures of Mr.Rhee, look for “Tales of Mr.Rhee Volume 1: Procreation of the Wicked”

2 thoughts on “Beyond the Rapture”