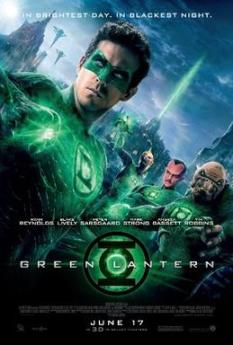 Marvel Studios’ Doctor Strange has become a worldwide hit, won acclaim and opened the doors for more eccentric material for future films. It’s also strikingly familiar in many ways to 2011’s Green Lantern from Warner Brother’s studios. Skeptical? Read on for the proof…

Doctor Strange details the story of neurosurgeon Stephen Strange as he loses the use of his healing hands, travels to the east seeking a cure, becomes skilled in the way of the mystic arts, and ultimately saves the World from Dormammu and his servants. Green Lantern is about Hal Jordan, a cocky and conflicted test pilot, drafted into an interstellar peace-keeping force and saves Earth from a giant gas cloud called Parallax. The video below goes into detail on how the two movies are alike.

Jeremy Jahns lays out a more specific beat-by-beat comparison. Both movies even have magic rings that affect the plot! This is something that clicked into place for me after I finished Doctor Strange and watched the end credits scene. Obviously, execution is a key difference separating the two films. It’s easily established that their stories are roughly the same; but their use of humor, actors, even special effects, merit examination.

Marvel Studios is no stranger to comedy, its an integral part of the “Marvel Formula” (however you wish to define it). Every film since 2007’s Iron Man has used self-aware, self-deprecating humor to allow audiences to connect to their characters and sell outlandish subject matter like advanced suits of armor or Norse gods that may be aliens. Like every previous film, Doctor Strange is full of jokes and gags to endear audiences to Stephen Strange’s journey in becoming Sorcerer Supreme. This is one film where the humor doesn’t land entirely. Either it’s unneeded for much of the movie, or some of the jokes aren’t that funny. It’s a point of contention for viewers, but it’s still funnier than Green Lantern. Tonally, I think Green Lantern manages to lace the humor throughout instead of it sticking out. With Ryan Reynolds as the lead, odds are 90/10 that he’s going to deliver some laughs on a regular basis.  It’s not enough to redeem Green Lantern, but Marvel could’ve considered cutting or refining the Beyonce nods. Stephen Strange’s injuries and desperation for a magic cure get forgotten once he learns to make portals and astral project himself for late-night studying, which takes away from the gravitas that had been built at the beginning. Still, Strange’s sarcasm and wit feels much fresher than Reynolds’ B-material.

Both films have talented casts delivering their lines. Green Lantern boosts Geoffery Rush, Micheal Clark Duncan, Mark Strong and Alexander Skarrsgard in supporting roles to Ryan Reynolds. Reynolds, though often charming, isn’t able to stretch beyond that. Blake Lively as Carol Ferris either doesn’t have enough material, or is not talented enough to elevate a by-the-numbers damsel into a compelling performance. In contrast, Rachel McAdams as Christine Palmer plays much better opposite Benedict Cumberbatch’s Strange. In fact, Tilda Swinton, Chiwetel Ejiofor, Mads Mikkelsen, and Benedict Wong give strong performances all around. Mark Strong and Micheal Clark Duncan’s Sinestro and Kilowog respectively are spot-on takes, which if they featured more prominently in the plot would give Green Lantern more credit. Doctor Strange‘s cast may not resemble their comic counterparts fully, but their delivery is strong enough to negate that. Although I think Strong’s Sinestro’s turn to evil makes a tad more narrative sense. Fear is shown to be addictive in Green Lantern,and Sinestro sees that the Green Lantern corps are not entirely the mightiest power in their universe. Doctor Strange‘s Baron Mordo does almost the exact same arc as Mikkelsen’s Kaecilius, which is disappointing to watch. Naturally, this is to set-up the sequel but it strikes me as uncreative from a writing stand-point. Also his belief that there are “too many sorcerers”. There’s dozens of them in the film, but few are shown to be very distinguished to affect the universe or upset the natural order like Mordo believes. Sinestro sees his fellow lanterns killed by Parallax, so he has evidence to believe that fear trumps willpower. Mordo losing faith in the Ancient One after she lies to him while he’s spent years seeing her protect the world, and seeing what happened to Kaecilius’s plans when he turned evil, doesn’t entirely add-up. Then again, neither does Sinestro turning evil at the end of Green Lantern, not fully. Both films could’ve added more scenes to show their respective anti-heroes turn to the dark side gradually. Jordan and Strange almost have this problem on the hero’s journey, except Strange is much smarter and more motivated than Jordan at doing anything. Strange’s mastery of the mystic arts may seem too montagey, but Jordan’s is far too short and ineffective to allow him much control over a Green Lantern ring despite what the script tells us. Strange spends months studying and learning from his teachers, even if some of his progress is questionable, Jordon gets a 10 minute beat-down and secret tip to beat Parallax at the end. Which brings up the final asset Doctor Strange has over Green Lantern: special VFX.

Green Latern’s trip to the alien world of Oa lasts about 14 minutes, while the rest of the film uses muddled or cheap looking visuals. It should come as no surprise that the production was rushed. In comparison, Marvel Studios pushed back production on Doctor Strange to allow Benedict Cumberbatch to have time for the filming. Under Scott Derrickson’s direction, the trippy Ditko visuals become a centerpiece of the film rather than a brief set-piece. It creates a more memorable viewing experience, and one of the few films I’d recommend seeing in 3-D. Despite Green Lantern‘s $200 million budget, it looks remarkably cheap. Even though the movies can essentially be boiled down to the same core elements narratively, a more pleasing coat of paint makes a world of difference.

So what does it mean that Doctor Strange and Green Latern are almost the same movie? Does it make Doctor Strange bad, or Green Lantern good? Absolutely not. Neither is perfect, but Doctor Strange is far more watchable. What it does mean is that comic films, and origin stories in particular, have become stuck in predictable and tired storylines. Doctor Strange owes its DNA to Iron Man and Batman Begins, which seems like a missed opportunity. While superhero fatigue continues to be a chicken little scenario, rehashing the same story over and over with minor tweaks courts making the fatigue real.

With more comic book films incoming, and plans for them to continue into decades, studios have to look into telling new stories that are not just action oriented and play to the tired and true.

One thought on “Doctor Strange is Green Lantern Done Right”