Teenage coming-of-age movies are an evergreen subject for Hollywood films, with many classic movies starring the High School teen trying to figure out life within a four year period in two hours or less.  Ferris Buller’s Day Off, The Breakfast Club, Fast Times at Ridgemont High, even the wacky and high concept ones like Encino Man, Weird Science, or Bill and Ted’s Excellent Adventure. Wonderful films starring teenage characters and their quest for popularity, love, and not becoming a jaded adult. It’s hard to tire of films like those, even as an burgeoning adult myself, because I remember my high school days vividly. So it is that Spider-Man Homecoming joins the many great high school movies for this generation, and firmly establishes Tom Holland as THE Spider-Man…

It’s not a perfect film, but Homecoming is the best Spider-Man movie yet. Despite five previous installments starring the character, this is the first one to really nail adapting him to the screen and making this Spidey fan happy.

I’ve been a fan of the character since I was six, and so I’ve always known who Spider-Man is. His personality, what he can do, what he’s about, has always been inside my head and since I’ve started watching live-action try to bring him to life, I made peace with the fact that it may never be done “just right”. Very few adaptations can top this: Marvel/Netflix’s Daredevil and Luke Cage come to mind.

What Homecoming does is give us a coming-of-age story set in the Marvel Cinematic Universe, so it carries the trade-mark humor and world-building, but also, an endearing revisit to a time anyone past the age of thirteen can appreciate. Peter Parker is a kid who had this amazing experience, entered a world so incredibly new from his old one, and then has to go back to just being a kid in Queens.

The movie doesn’t let Captain America:Civil War drift past your mind, or that The Avengers and Spider-Man are connected now. The two worlds mesh seamlessly together, and impact Peter and his antagonists in big ways.  Peter wants nothing more than to join the Avengers and hang out with Iron Man, while villain Adrian Toomes wants to profit from alien tech left behind by The Incident. Iron Man, who appears in the movie sparingly, tries to protect Peter from getting in over his head despite Peter doing it anyway. 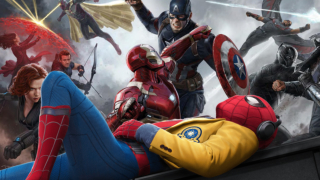 The movie is decidedly more character driven and low key than most Marvel films. It shares more in common with Kick-Ass than Iron Man or even the past Spidey films. I can’t believe it took this long to realize it, but all five of the previous adaptations fell too serious in contrast now. They had comedic moments, but Homecoming outdoes those and gives a tone that compliments Peter’s struggle to be a high school kid and a superhero. There’s a lack of teen angst, the movie is upbeat and modern in several ways, without sacrificing the problems that teenagers face.

Peter and his best friend Ned are socially awkward, who desire to be cool and have girlfriends. Their friendship feels very natural and believable, more so than Peter’s interactions with Harry Osborn in the past. Ned learns of Peter’s dual identity pretty early, and urges him to use his powers to gain popularity. Without ever dragging up that old adage that’s core to the character, Peter always chooses not (or is forced not to) based on his principals. Of course, even choosing to do the right thing for the right reasons doesn’t always work out for him. This Spider-Man is more inexperienced, a little clumsy, even more nervous when fighting criminals or facing danger. It feels novel, but its uniquely faithful to the comics.

Where the movie diverges from past iterations, is how the supporting cast is portrayed. This is the most diverse Midtown High I’ve ever seen, and that by itself is not an issue I have with the film. The movie uses Peter’s supporting cast very well, and doesn’t make its inclusiveness a big deal. The problem comes in that these classic characters almost lose what makes them the classic characters we know. Ned Leeds for instance, is actually more like Miles Morales’ best friend Ganke Lee. To an absurd degree. Now we can argue why Peter needs to steal Miles Morales best friend when Miles can’t have his own movie, but its easier to say that the writers took major liberties outside of Peter Parker. Flash Thompson is actually a fully realized character here, who while acting like we would expect based on the comics, isn’t an idiot jock who beats up Peter. Instead, they’re on the academic decathlon team and Flash constantly calls Peter “Penis Parker”. Flash being such a minor character, I can let it slide since it actually works well in the movie. Zendaya’s role, which I won’t spoil, actually upsets me more as a purist of the comics. Her performance is fine, good even, but I don’t like how drastically it differs from how I think of her character and how that will play out going forward.  Morisa Tomei’s Aunt May ends up being a joy in the movie, as well as the most compelling Aunt May we’ve seen so far. The decision to make Aunt May younger and prettier isn’t totally justified, but Tomei’s take is funny and personable enough that it won me over.

What took the longest for me to get behind was the main antagonist, the Vulture played by Micheal Keaton. For the first half of the movie, I found him hammy and sort of generic. He’s deadly, he’s an adequate threat to Spider-Man, and his motivations are clear, but he wasn’t very interesting until much later in the film from when he’s introduced.

It’s not until Keaton’s Adrian Toomes meets Peter Parker that his performance starts to spark. Keaton is able to give range but and be more intimidating face-to-face instead of just when he’s flying around in a mech suit. Keaton’s talent is never in question, but the movie doesn’t give him much to do for his character until he actually interacts personally with Spider-Man. As far as bringing the Vulture to the big screen for the first time, its not going to be looked back on as a iconic take. William Dafoe’s Green Goblin, costume aside, really did the character justice. Same with Alfred Molina’s Doc Ock, both performances set the standard for those characters and the bench marks for every villain role in a Spider-Man movie. Vulture is far above Lizard, Electro, and Dane Dehaans’ Green Goblin, but Keaton doesn’t really embody the role so that no one else could play it.

For his part, Tom Holland is the best Peter Parker, and the best Spider-Man, we could hope for. He has the youth, the muscle, the comedic timing, and the talent to portray a gawky guy with spider powers. While I still like Tobey Maguire’s emotional vulnerability in the Sam Raimi films, Holland balances that much better with an exuberance and zest for life that fits into most Spider-Man takes. Likewise with Andrew Garfield’s “cool” Peter and CGI action, Holland’s Peter is more geek then angry loner, and at times actually seems to be doing his own stunts without relying on special effects. The movie never overloads you with fast-paced imagery of Spider-Man fighting or swinging through Manhattan in POV shots.

It seems to have a loose idea of what Queens is, as the story calls for locations like Washington D.C. to be present, but otherwise Queens seems much smaller and more urban than I’ve seen in other films. Those tended to put Spider-Man in Times Square, or the near the skyscrapers of the NYC skyline. It’s a very minor detail, particularly as I’ve never been near New York City, however, most Marvel characters tend to emphasize the unique environment of New York to great effect. Spider-Man’s relationship to Queens makes it feel much quieter and more quaint than I’d have expected, but it works fine in the movie.

Robert Downey Jr’s Tony Stark appears in the film sporadically as a mentor to Peter, keeping tabs on him and telling him constantly to play it safe and let the adults handle the big problems. Peter, desperate to prove himself, defies Tony at every opportunity, which  is ironic as Tony is one of the few adults active in Peter’s life. Aunt May has a nurturing role, and Adrian Toomes has a cliched reason for becoming the Vulture, yet most of Peter’s adult role models appear very distant or humorously inept in their duties. Martin Starr as the academic decathlon coach takes an active interest in his students welfare, only to show he’s poorly suited for it. The movie uses his acting well, which is another small gripe I have with the film, it tends to sell actors short when it could let them flourish. 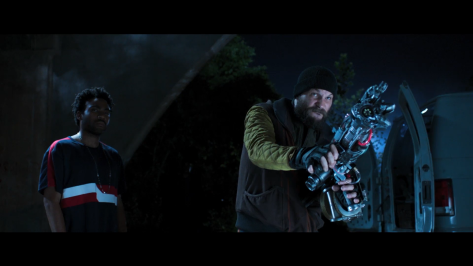 Donald Glover is briefly in the movie, playing a hood archetype with little personality that fans of Atlanta and Miles Morales are sure to be disappointed by. His inclusion seems pointless considering how fans wanted him to be the next actor to play Spider-Man, but he wounds up being more or less a cameo. The same goes for the actor on the right, who would have made a great future villain only to be a side note for the Vulture. 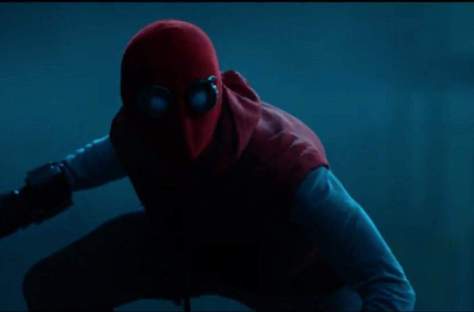 I also found the music choices to be oddly retro considering how modern the rest of the film is constructed. As much as I like Blitzkrieg Bop, I would have gone with something more current for Spider-Man to swing to (pun intended). The classic Spider-Man theme is referenced in the opening credits, but I would have liked it to be more of an musical theme than an easter egg.

As I said, the movie’s not perfect, but as a Spider-Man film, it is a gem. I wrote a while back on how Marvel could fix Spidey for the MCU, and they seemed to follow each point to a T (I expect a check by the end of the year). Homecoming presents the mythos very well, while letting its world-building be a natural extension of the film rather than exhausting plot obstacles. It’s clear that this venture was carefully built by the director and screenwriters (of which there were at least six) to make this film as good as it could be. After watching the wreck that was The Amazing Spider-Man 1 and 2, its nice to have hope that I can enjoy a web head worth watching. As someone whose been very critical of Marvel’s cinematic output on the big and small screen, I’m impressed.

While it may follow many traits of the MCU formula, there’s a case here for it being one of the top five films that Marvel has put out.

One thought on “Spider-Man Homecoming Review”