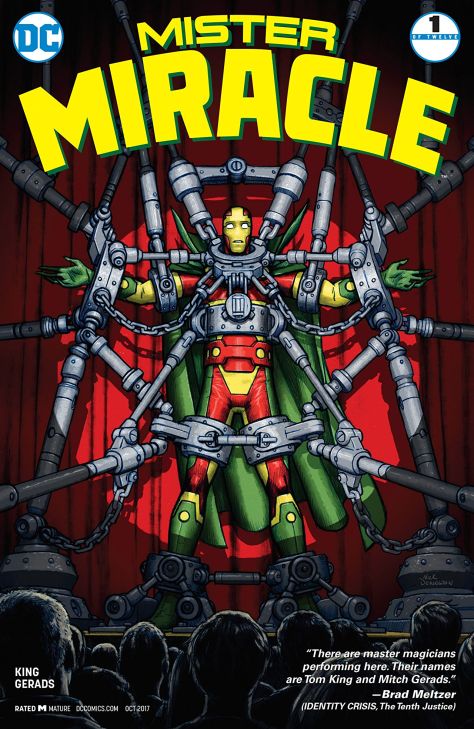 Mister Miracle #1 is a dizzying and infectious debut issue of a series from three masters of their craft in Tom King, Mitch Gerads & Clayton Cowles, working at the height of their capabilities. Surreal, dark and engrossing, Mister Miracle takes on the conventions of Jack Kirby’s iconic New Gods characters for a modern day treatise on paranoia and fear in our era of encroaching fascism on western liberal democracy. Deeply creative and engrossing, Mister Miracle is the best debut issue of a comics series in years, and it’s excellent by almost any measure.

Mister Miracle #1 follows the title character after an apparent suicide attempt, following the protagonist in his day to day routine of recovery after being discharged from medical care. But things are amiss as central tenants of his reality are subtly shifting, in both the small and large scale. In one of the book’s most impressive sequences, Scott goes on a talk show hosted by (Glorious) Godfrey to discuss the attempted suicide. As Scott explains that his suicide was actually his idea of the ultimate escape, that being death, Godfrey poignantly asks whether Mister Miracle was in fact successful in his pursuit, in effect asking Scott Free if he is currently alive or dead, to which he can only reply with a puzzled “What?” All the while, almost every page is a nine panel grid with at least one panel box featuring white text against a black background that simply reads “Darkseid is”  the implication later being revealed that Darkseid has found the anti-life equation, and is altering reality to his will.

King, Gerads & Cowles take that conceit, and inject it with their masterful craftsmanship. King & Gerads have developed an uncanny synergy with one another, as is evident from their work on Sheriff of Babylon & Batman #23. Mister Miracle #1 represents an even greater leap forward for the duo, with it’s complex storytelling and piercing visual storytelling. King’s dialogue and character work is impressive for how emotionally penetrating it is in its simplicity. While conversations in the book tend to be short and to the point, they have a Hemingwayesque ability to contain multitudes in their minimalism. The theme of existential dread in Mister Miracle is subtle yet all encompassing, with the reader sharing in the feeling of confusion with the main character. It’s a phenomenally concise yet engrossing writing that sticks with you, and makes multiple reads of the issue feel uniquely rewarding.

Artist Mitch Gerads is nothing short of incredible, fusing his scratchy washed out realism with a flair of the supernatural in his color palette that feel’s similar to Greg Smallwood & Jordie Bellaire’s work together on Moon Knight, but in a style that feel’s singular to the artist himself. Doing an entire comic in the nine panel grid format is incredibly taxing for an illustrator, but Gerads never let’s up, with defining detail and expressive character work for each box. Gerads does incredibly technical and expressive cartooning for the book’s actors and setting, and it breathes life into the pages beautifully.

Yet, perhaps the most affecting panel in Mister Miracle is it’s most simple and repetitive, the white text on black background of “Darkseid is” that is repeated throughout, and represents one of only four break’s in the book’s nine panel grid structure when it’s used to encompass an entire page. Lettering is a thankless job, which is often only noticeable to readers when it’s done incorrectly. It’s tedious and can be at the mercy of the writers and editors making last minute tweaks to the script. I don’t give letterer’s nearly enough credit in my comics criticism, it’s something that I need to work on. Mister Miracle’s letter Clayton Cowles has managed to distinguish himself across the titles he’s worked on, but in Mister Miracle, the plain and straight forward text of “Darkseid is” that’s scattered across the panels represents some of the most effective application of the skill in the medium. Obviously, it’s placement and usage in the book is as much or the decision of the book’s other creators, but Cowles simplicity gives the letters a palpable and increasing level of menace and terror, and his contribution there specifically, in addition to the clear and concise scripting he provides throughout the issue, pushes the title over the top in terms of it’s effectiveness.

There is so much more to Mister Miracle, like the tape lines that you see over Oberon in close up panels of his face, or the way the panels during the TV interview are  made to look like a they’re coming from a television screen with static, the body proportions of Big Barda, Orion’s helmet, Kirby crackle; it’s captivating on every level. Last night, after what was probably approaching my tenth reading of the issue, I got stuck trying to decipher the numerology from background television chatter of a sports caster describing the ineptitude of a Gotham Knights quarterback by contrasting his touchdowns to interceptions. Mister Miracle contains multitudes, and beyond being the best comic I read this week, it’s the best debut of a new series since Saga. It’s a triumph of the medium that perfectly honors the title’s creator Jack Kirby on the month that would’ve been his 100th birthday. Enthralling and arresting in equal measure, in the series debut, Mister Miracle truly lives up to it’s cover title.