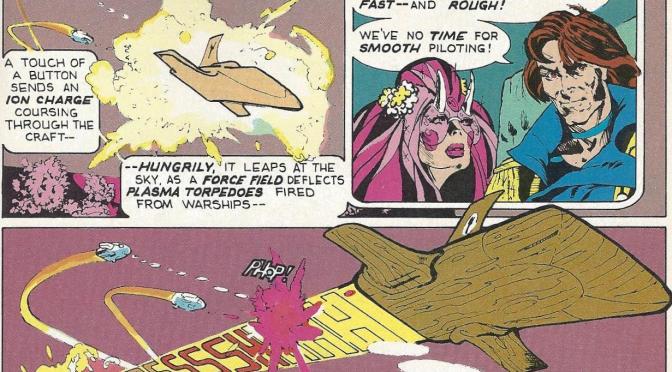 Curious about the comic that inspired Lucas to request Chaykin for the Star Wars adaptation, Nothing But Comics takes a look at the Ironwolf strip presented in DC Comics’ Weird Worlds #8-#10.

END_OF_DOCUMENT_TOKEN_TO_BE_REPLACED 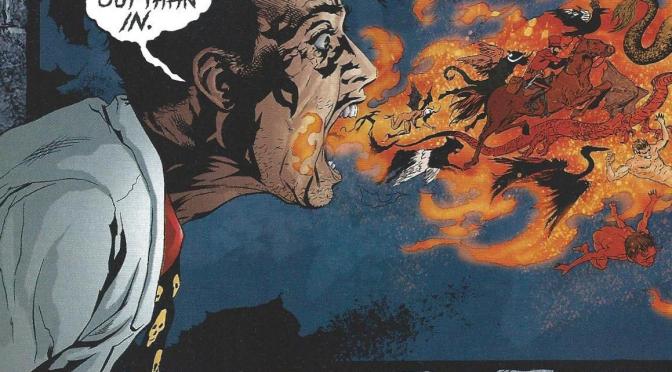 Sixteen years ago, in the pages of the comic Promethea, writer Alan Moore and artist J. H. Williams III (with inker Mick Gray, colorist Jeromy Cox, and letterer Todd Klein) satirized the American public’s desire for tough, colorful politicians and political spectacle. The creative team did so by depicting the travails of a supporting character — the demonically-possessed New York City mayor, Sonny Baskerville. Moore uses Baskerville’s possession to comment on the American public’s shallow political interests and the appeal of brash politicians.

END_OF_DOCUMENT_TOKEN_TO_BE_REPLACED

Marvel Entertainment CEO Ike Perlmutter’s recent $1 million donation to a charity associated with Republican presidential candidate Donald Trump sparked controversy. Some argued that this contribution from a top Marvel executive benefited a candidate whose politics do not reflect Marvel Comics’ ongoing efforts to be diverse in its content and appeal to comics readers. The controversy also generated interest in Perlmutter and his wife’s $2 million contribution to a political super PAC supporting Republican presidential candidate Marco Rubio.

While the controversy focused on the politics of the candidates who benefited from Perlmutter’s contributions, one troubling aspect of these donations remains unexamined: the influence that wealthy individuals like Perlmutter can have on the U.S. election process, particularly through contributions to super PACs.

To explore this influence, just imagine that the Marvel Universe has the same U.S. campaign finance laws that we have in the real world, and let’s see how this impacts the hypothetical political activities of our favorite comics characters.

END_OF_DOCUMENT_TOKEN_TO_BE_REPLACED

Today marks the ten-year anniversary of the premiere of the Justice League Unlimited episode “Flash and Substance” (February 11, 2006). In that episode, the people of Central City honor the Flash for his heroism, and declare the day of celebration “Flash Appreciation Day.” The episode inspired fans to celebrate the DC Comics superhero on February 11th each year.

It’s great that the Flash has a special day each year for fans to express their appreciation, but what’s the best way to honor a fictional superhero? Since we can’t give Flash the key to Central City, Nothing But Comics, in partnership with eight sites, is recommending that you show your appreciation for the Flash by being a hero for comics creators in need — this Flash Appreciation Day, we’re asking Flash fans to support the Hero Initiative.

END_OF_DOCUMENT_TOKEN_TO_BE_REPLACED

“In Elseworlds, heroes are taken from their usual settings and put into strange times and places — some that have existed or might have existed, and others that can’t or shouldn’t exist. The result is stories that make characters that are as familiar as yesterday seem as fresh as tomorrow.” — Elseworlds tagline

DC Comics’ Elseworlds imprint allowed creators to present stories about the publisher’s superheroes that were set outside the characters’ established narrative continuity (for example, Batman fighting crime in Victorian Era Gotham, or in a puritanical America run by a corrupt theocratic regime). The imprint published mostly standalone graphic novels, but in 1999, the creative team of writer Pat McGreal, artist Norm Breyfogle, and colorist Noelle Giddings presented an alternate vision of superhero the Flash in an Elseworlds miniseries, the three-issue Flashpoint.

In honor of this week’s upcoming Flash Appreciation Day (February 11th), Nothing But Comics takes a look at Flashpoint and its portrayal of the Flash.

END_OF_DOCUMENT_TOKEN_TO_BE_REPLACED

In November 2015, Nothing But Comics interviewed The Dinglehopper blog team – Erin and Michael Perry – about their process for decoding the strange language in the Image Comics series Paper Girls.  With this week’s release of Paper Girls #5, The Dinglehopper team has updated its decoder chart.

END_OF_DOCUMENT_TOKEN_TO_BE_REPLACED 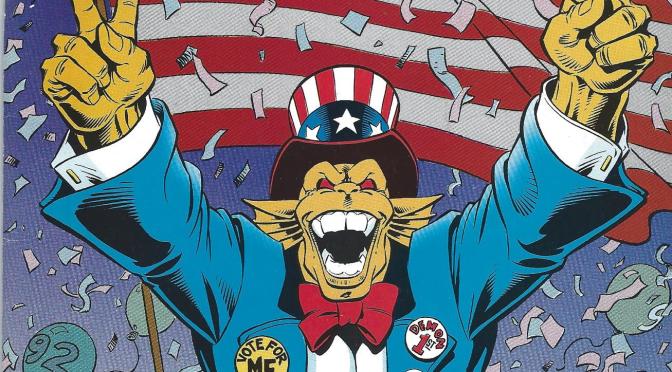 As Iowa’s citizens caucus today to vote for various presidential candidates, Nothing But Comics looks back at the 1992 U.S. presidential bid of Etrigan the Demon in the pages of DC Comics’ The Demon series. In the four-issue story arc “Political Asylum” (The Demon #26-29), writer Dwayne McDuffie, penciller Val Semeiks, inker Bob Smith, and colorist Robbie Busch satirize American politics. Although the creative team pokes fun at the Republican Party’s 1992 presidential primary campaign, the troubling issues lampooned in the story remain relevant to modern politics.

END_OF_DOCUMENT_TOKEN_TO_BE_REPLACED

@Manruss Superhero the Red Bee has a question about #DCComics #Prez State of the Union address pic.twitter.com/CT9M2nu5As

END_OF_DOCUMENT_TOKEN_TO_BE_REPLACED

Marvel Comics’ Black Panther character is the first black superhero to appear in American comic books, debuting in Fantastic Four #52 (July 1966). While the Black Panther’s published adventures are plentiful and continue today, the adventures of America’s first black superheroine, The Butterfly, are few; she had two appearances in a short-lived comics magazine generated by a now-defunct comics publisher, and the character is not well-known to modern comics readers.

END_OF_DOCUMENT_TOKEN_TO_BE_REPLACED

In November 2015, Nothing But Comics interviewed The Dinglehopper blog team – Erin and Michael Perry – about their process for decoding the strange language in the Image Comics series Paper Girls.  With this week’s release of Paper Girls #4, The Dinglehopper team has updated its decoder chart.