In this week’s New Yorker (cover dated 11-07-16), cartoonist Harry Bliss offers some pretty compelling evidence that the Hulk is not the strongest one of all.

Somewhere General Ross is dashing off a directive for radically reworking the Hulkbusters . .  .

“He says he feels empty inside.”

In this week’s issue of The New Yorker (cover date August 8th & 15th), Darrin Bell offers up a fresh spin on the Superman/Luthor confrontation: 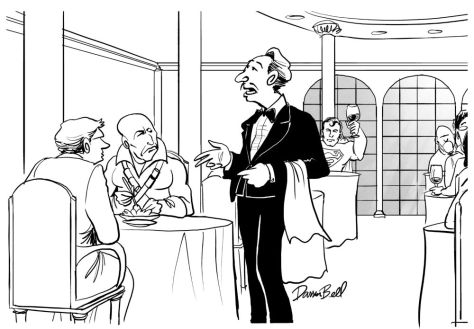 “The gentleman says, ‘You tell me you’ve got a dastardly plan, then I’ll swear to defeat you, and then we can both expense this.’ ”

It may be time for mild-mannered Clark Kent to have a chat with the Daily Planet’s HR Department . . .

OK, so someone at Warner Brothers decided that we needed a Pepe Le Pew movie.

They also decided that Max Landis (Chronicle, American Ultra & Superman: American Alien) was the person to write it.

Pepe was a member of Warner Brothers’ stable of Looney Tunes characters. He spent most of his time ogling black cats and refusing to hear “no” as “no.”

Could this be the same project that reportedly signed Mike Myers to voice the lead back in 2010?

The November 13, 2015 terrorist attacks in Paris shocked the world.  A combination of shootings and suicide bombings left 129 people dead and 352 people wounded, according to current news reports.  The terrorist group the Islamic State (sometimes referred to in the media as ISIS, ISIL, or IS) claimed responsibility for the attacks.

In response, people from all over the world are sharing cartoons through social media to express their thoughts and feelings about the attacks. Below are some of the cartoons that were shared this past weekend on Twitter.

END_OF_DOCUMENT_TOKEN_TO_BE_REPLACED

One of the most poignant images created in reaction to last week’s terrorist attack on the headquarters of the French satirical magazine Charlie Hebdo that killed 12 people, including five cartoonists, was a cartoon depicting the iconic comics character Charlie Brown sitting on a bench, apparently crying.  The image was created years ago by Charlie Brown’s creator, Charles Schulz; after hearing about the attack, British writer and editor Magnus Shaw added the words “Je Suis Charlie” (“I am Charlie”) to the art, and tweeted the cartoon with the following message – “A terrible day for all cartoonists. #JeSuisCharlie”.

The image was re-tweeted and favorited by thousands, and featured on multiple news sites (including Reuters, USA Today, BuzzFeed, and The Independent) as an example of the cartoons created in response to the tragedy.  Shaw’s use of the Charlie Brown cartoon was particularly apt, as the character indirectly inspired the name of the magazine.

END_OF_DOCUMENT_TOKEN_TO_BE_REPLACED 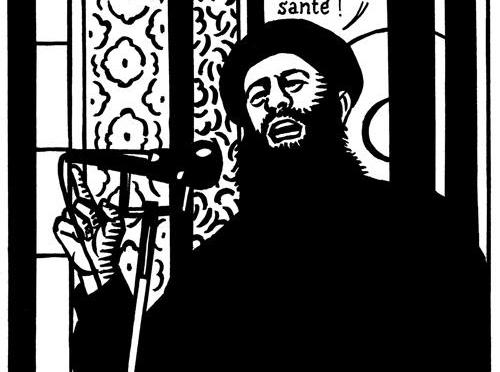 Many reports about the lethal attack by masked gunmen on the headquarters of the satirical French magazine Charlie Hebdo  have noted the last cartoon tweeted by the magazine before the attack.  The cartoon depicts terrorist ISIS leader Abu Bakr al-Baghdadi in stark black-and-white, speaking into a microphone; translated to English, a caption reads, “Best wishes. To you, too, Al-Baghdadi”, to which Al-Baghdadi responds,  “And especially good health.”

END_OF_DOCUMENT_TOKEN_TO_BE_REPLACED 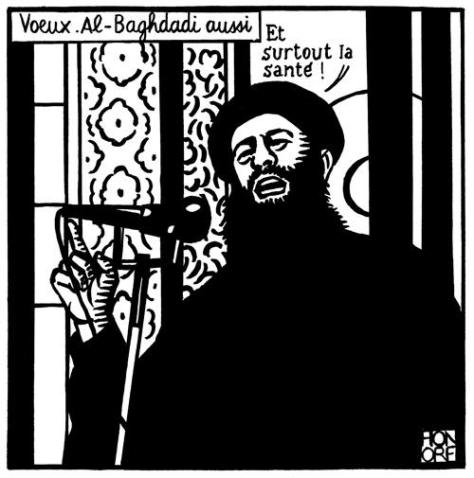 As reported by Comic Book Resources and The Guardian, twelve people have been killed by masked gunmen at the headquarters of French satire magazine Charlie Hebdo.  Although the motive for the attack is currently unclear, the magazine has a history of satirizing Islam, including printing provocative cartoons that depict the Muslim prophet Mohammed.