END_OF_DOCUMENT_TOKEN_TO_BE_REPLACED

Valiant did spend plenty of time yesterday discussing properties besides Bloodshot. They started with a plug for the conclusion of Book of Death arriving at the end of the month.  They promised that it would have major reverberations throughout the Valiant Universe. While this may sound like the typical boilerplate Event language, Valiant’s track record backs up previous claims. Harbinger Wars, Armor Hunters & The Valiant all sparked future stories in ways that never felt gimmicky. They did shift the status quo. So fans were told to keep an eye on The Eternal Warrior, who just happens to have a new series launching soon.
END_OF_DOCUMENT_TOKEN_TO_BE_REPLACED

By its nature, The Wicked + The Divine has been about youth since Day 1. In the world of the series, every 40 years a dozen deities are reincarnated, invested with enormous power and entrusted with the task of nudging human culture forward in opposition to The Great Darkness. Their light burns bright, yet also burns quickly; once they receive their divinity, none of them live longer than two years. This rapid confrontation with mortality is what sets The Wicked + The Divine apart from Kieron Gillen and Jamie McKelvie’s previous youth soaked thrill ride, Young Avengers. In place of Young Avengers’ life-affirming focus on growth, The Wicked + The Divine gazes straight into the abyss of mortality. However, whenever a writer chooses to contemplate youth, they are almost always led to a conflict of generations. This is true of The Wicked + The Divine as well, especially in the excellent recent arc, Rising Action.

END_OF_DOCUMENT_TOKEN_TO_BE_REPLACED

Valiant Comics will be announcing a whole slew of new titles today live on periscope. Will be following the announcements and sharing them here. Stay tuned and keep that refresh button handy for all the new Valiant news coming up at 3 PM EST. END_OF_DOCUMENT_TOKEN_TO_BE_REPLACED

END_OF_DOCUMENT_TOKEN_TO_BE_REPLACED 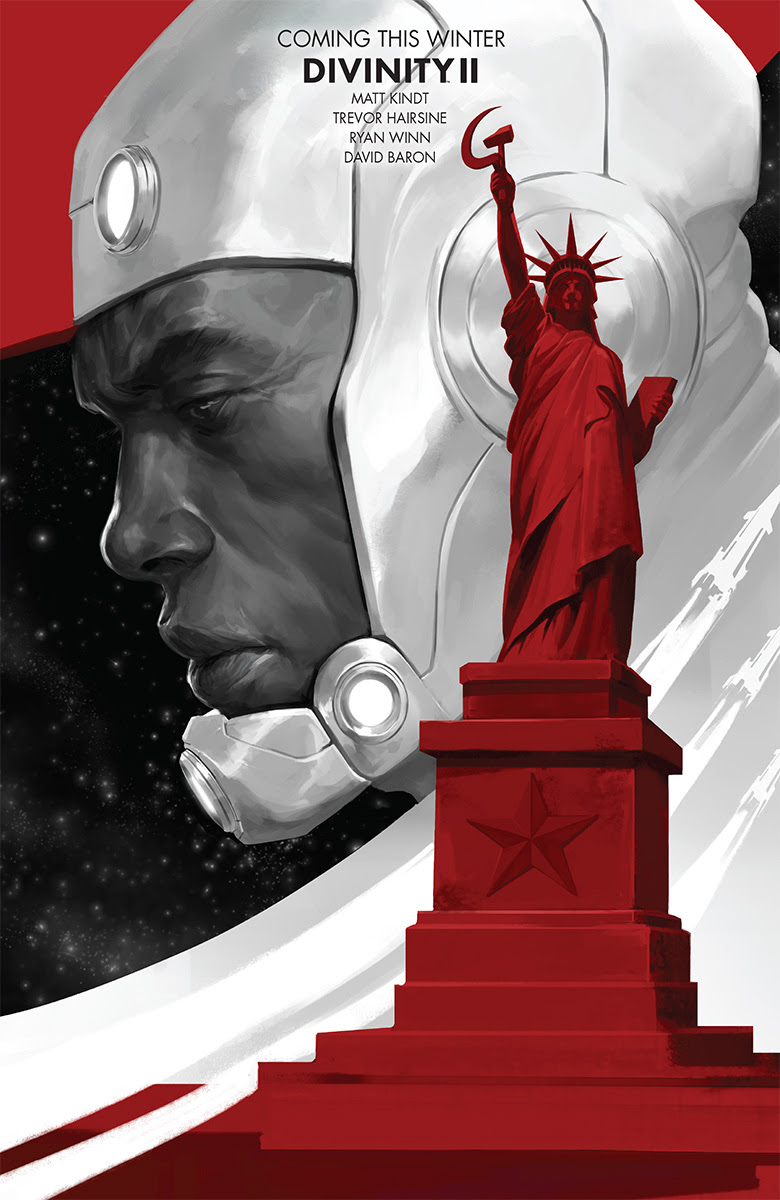 This week, Matt Kindt brings his Divinity series to an emotionally satisfying conclusion. For the past three issues, readers have followed Abram Adams on his journey from aspiring Soviet cosmonaut to deep space explorer to cosmic powerful entity. He has traveled to the furthest reaches of the galaxy, where he came face-to-face with an anomaly that killed his two crewmates, while leaving him with fantastical powers. Feeling a new purpose, Abram returned to Earth, where he hoped to seed new hope for both himself and others.

Abram tried to build a new home for himself in the Australian Outback, only to find that his newfound peace could not last for long. Followers soon drifted into his orbit, attracted by his miraculous powers and compassionate nature. Abram only wishes to build what is good, fulfilling people’s innermost wishes. For himself, he reaches through time in an attempt to reunite with the love of his life and their daughter, who he never knew. Abram learns, though, that good intentions are rarely enough.
END_OF_DOCUMENT_TOKEN_TO_BE_REPLACED

One of the most satisfying elements of the Valiant revival is how naturally Matt Kindt has settled into their larger universe. While he had his successes with work for hire projects at The Big Two (Frankenstein Agent of S.H.A.D.E. or Marvel Knights Spider-Man), he never seemed to find his place in the companies in the same manner indie creators like Kieron Gillen or Jonathan Hickman had before him. Valiant, though, has proven much more receptive to his talents allowing Kindt to place his own distinct stamp on properties such as Ninjak. His Divinity mini-series read like a creator-owned book which happened to take place in a larger shared universe. Since then, readers have watched the character more fully integrated into Valiant, particularly having a major presence in an arc of Imperium. On Wednesday, Valiant launched a sequel to last year’s mini-series, which continues the strong storytelling of the original.