Today our podcast explores creators that have been able to make their marks on under the radar work for hire comics. These are comic’s pro’s that have made their names doing great work on less well known but equally excellent licensed titles along with a couple names from Marvel & DC that you may not know yet, but are making a huge impact. We speak directly with Fred Van Lente, Max Fiumara, Stephen Byrne, Edgar Delgado & Mico Suayah. Click below for the audio and more on the interviews  END_OF_DOCUMENT_TOKEN_TO_BE_REPLACED

END_OF_DOCUMENT_TOKEN_TO_BE_REPLACED

For twenty-five issues, assorted tie-ins, a couple zero issues and an epilogue mini-series, Harbinger was one of the best books on the stands. Writer Joshua Dysart revitalized a 90s concept into a captivating and increasingly relevant series, full of compelling character work and engaged social issues. He did not skimp on the action either, or the consequences which often linger from violence. After he brought the series to a close, the characters mostly drifted to the side, while he concentrated on their antagonist Toyo Harada’s new title Imperium. Gradually, though, publisher Valiant has been bringing the Harbinger cast back into circulation. The year started with former Renegade Faith gaining her own solo series. Later this year she will rejoin her former teammates for a new Renegades title (written by Rafael Roberts who has been doing fantastic work on the current Archer & Armstrong book). This week, the young heroes of Generation Zero step-up for their first ongoing series, the debut issue of which offers a promising beginning.

END_OF_DOCUMENT_TOKEN_TO_BE_REPLACED

“I can’t wait to see what Tom King and David Finch can do with The Dark Knight.”

END_OF_DOCUMENT_TOKEN_TO_BE_REPLACED

At Nothing But Comics, we’re big fans of the James Bond franchise and we’re very excited about this week’s debut of the new James Bond movie Spectre.  To celebrate, we dispatched rejected Bond villain Brutus Brute to ask some of our favorite comics creators about their favorite James Bond movie.

Please feel free to share your favorite Bond movie in the comments below.

To honor this week's premier of SPECTRE, comics blog @NothingButComic has a question for you. pic.twitter.com/k3NKcXOfRu

END_OF_DOCUMENT_TOKEN_TO_BE_REPLACED

“Protect the innocent, defend the world, save the day. Olympus’s favorite son is back like you’ve never seen him before! An ancient warrior in the modern day, Hercules battles everything from street-level crime to cosmic scale threats. Whether it’s protecting his block, his city or the entire world – no labor is too big or too small for the mighty Hercules! But a new evil has awoken – one that will push the demi-god to the limit and test his mighty resolve. The world’s first super hero is back in the fight, but will his new lease on life be short lived?” (Via Marvel.com)

In the Post-Secret Wars All-New Marvel NOW!, we’re getting a new Hercules series that is 100% he-man-women-lover. Not everyone loves that concept though. Is this yet another setback by the publisher vis-a-vis the Hip-Hop variants and forgetting about Blade?

END_OF_DOCUMENT_TOKEN_TO_BE_REPLACED

Once again The Week’s Finest stumped me. I thought for sure an Image debut or a retro Superhero story would engage me and earn the crown as the best comic (in my humble opinion). Yet, only the increasingly awesome time-travel antics of Ivar, Timewalker surpassed all my previous expectations.

END_OF_DOCUMENT_TOKEN_TO_BE_REPLACED 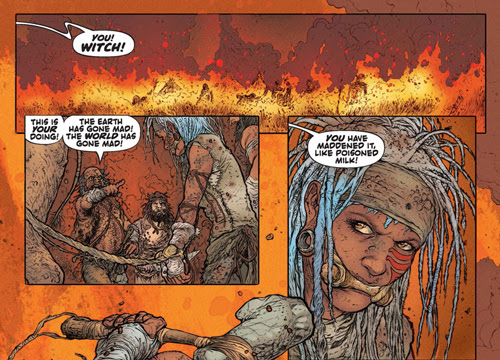 BOOK OF DEATH: LEGENDS OF THE GEOMANCER #1 (of 4)*
Written by FRED VAN LENTE
Art by JUAN JOSÉ RYP
Cover by MARGUERITE SAUVAGE (MAY151594)
INCENTIVE | 24 pages | T+ | On Sale JULY 15 (FOC – 6/22/15)
*ATTENTION RETAILERS: PLEASE SEE THE DIAMOND DAILY OR VALIANT RETAILER EMAIL TO FIND OUT HOW TO QUALIFY FOR THIS LIMITED RATIO INCENTIVE. QUANTITIES WILL BE BASED ON ORDERS OF BOOK OF DEATH #1.