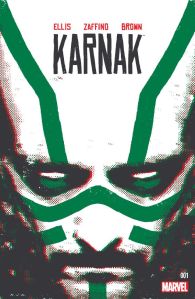 “Was it just me or did the voice feel a little too Ellis & not enough Karnak?”-Cosmo

Karnak is a an Inhuman character who, despite all of Marvel’s best efforts, really doesn’t have much of a voice. There is a certain consistency from his debut in the Lee/Kirby Fantastic Four all the way up to Jenkins/Lee Marvel Knights Inhumans series as the level headed counterpart to angry Gorgen, but that and his super power to see the flaw in anything are his only defining traits. In the series debut’s Ellis approaches Karnak as a concept, it’s the writer asking, if you could look at anything and see its central flaw, what would you be like as a person? But because Ellis is approaching Karnak as a concept, it almost feels like he’s inserting his personality onto the protagonist either consciously or unconsciously, or at least, a version of Warren Ellis devoid of his humanity with analytics in it’s place. It got to a point where I actually thought Karnak looked like Warren Ellis. And all that makes sense from a certain angle, if you are defining the character by his super power, then Karnak’s particular power set is going to deconstruct any semblance of person-hood because in the grand scheme of the universe, person-hood means absolutely nothing. Yet because Ellis is a person, he ends up writing himself into the protagonist almost by default.

Karnak’s singularity is displayed by contrast as much of the first issue focuses on how he interacts with other people. The book is light on action in favor of dialogue and set up, but there’s a sort of dark humor to it in a Nihilist Arby’s sort of way that helps keep the narrative engaging. Artist Gerardo Zaffino is aces in his Marvel debut with a rough and scratchy line style which set’s the mood and tone for the issue that’s similar to visual story telling from illustrators like Garry Brown or Michael Lark. He has a deceptively subtle style of character work that sneaks up on the reader with the way that he can establish emotion from his actors without calling attention to it. When he want’s to draw attention to something, it’s felt as is evident in the opening full page shot on the Tower Of Wisdom or the panel by panel breakdown of a bullet shooting out of a gun & Karnak’s reaction towards it. Dan Brown accentuates the art by making earth tones the primary colors in contrast to the dark and lifeless industrial setting in the background. He does this brilliant shading of Karnak’s face for different panels to establish what passes for emotion in this iteration of the character.

Karnak is certainly interesting and in a lot of ways, it’s good, but it also feels cold and distant, even if that’s ultimately by design. From a craft standpoint, it’s fascinating to see Warren Ellis take on the character and mine all these different idea’s out of his core concept. As a story, it’s not all the way there. How much everything else can make up for that will be entirely dependent on how you feel about Warren Ellis, in a issue titled “The Flaw In All Things” the writer inadvertently self identifies.

Dean doesn’t want you to forget about…

The Field #1
I do not usually recommend a comic I know nothing about but that is because I have never come across a comic about Fugue state written by Ed Brisson.  “A man wakes in a field wearing nothing but his underwear. He’s got no idea who he is or how he got there. His only connection to the outside world is a cell phone that receives mysterious texts warning him of impending danger.” Does it get any better than that? I don’t remember…
END_OF_DOCUMENT_TOKEN_TO_BE_REPLACED

Matt Kindt’s 2013 was probably his best year ever as comic professional. For a guy who’s been producing self-published comics since 1990, was first published over ten years ago, and was nominated for multiple Harvey and Eisner awards during that time, it wasn’t until last year that mainstream comics seemed to catch up. Starting with a run on DC’s Frankenstein: Agent of Shade in 2012, Kindt’s profile continued to rise as interest increased for his fantastic creator owned comics Mind MGMT  his take on Valiants crossover Unity , his stint on Suicide Squad, and his original OGN Red Handed. Kindt is a brilliant comic creator who’s been leading the innovation of the medium for over a decade by playing with panel layouts and designs in ways that comics like Young Avengers, Batman Inc and Hawkeye wouldn’t catch up to for years. So it’s ironic that Kindt’s work on the largest publisher in comics would go largely unnoticed from comic fans and media alike, but it’s probably fitting; even when he gets the largest audience he’s ever had, his strongest work for hire on the biggest stage possible gets ignored. But that’s also at a loss for the fan base because his work on Marvel’s Inhumanity: Awakening and Marvel Knights Spiderman is the closest that Kindt has gotten to the kinetic energy and creative force of his creator owned comics on a work for hire assignment, and just like over the last thirteen years, comic readers are ignoring some of his strongest modern work even now that they know who he is.

END_OF_DOCUMENT_TOKEN_TO_BE_REPLACED

So here we are again with ALL NEW MARVEL NOW WHERE NOTHING WILL BE THE SAME BLAH BLAH ZOMG whatever. The big difference now is that instead of shuffling most of their current creative talent like they did with the first Marvel Now initiative this time we are getting a lot of new writers and artists while Marvel is introducing a lot of comics featuring characters that have traditionally had a hard time selling consistently the way your X-Men, Thor or Iron Man comics have. I’m not bothering with titles that are being relaunched after less than a few months so don’t expect my thoughts on the upcoming Daredevil or Captain Marvel relaunches (there going to be awesome. Duh.)