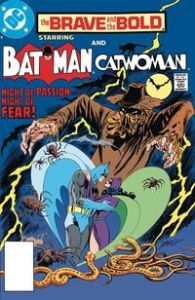 “There is a long list of talented authors who have written for The Dark Knight, and Alan Brennert deserves to ranked as highly as any of them. This long overdue hardcover collects all of his Batman stories in one place, including “To Kill a Legend” & “The Autobiography of Bruce Wayne” which are two of the best Batman tales ever. You also get some additional The Brave and the Bold team-ups and fan favorite Elseworlds The Holy Terror. Artistic collaborators include Jim Aparo, Norm Breyfogle and Joe Staton. What else do you need?”

END_OF_DOCUMENT_TOKEN_TO_BE_REPLACED 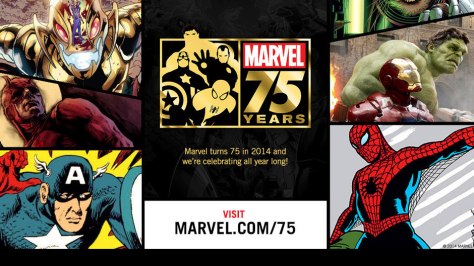 This week, the NBC! community made its recommendations for the best Marvel Comics issue of the past 75 years, and now it’s time to choose the best Marvel Comics issue ever!  Below is a poll comprised of titles recommended by the NBC! community (you can read all the NBC! articles and comments on this topic here).  The poll will close this Sunday (6/15/14) at 6 p.m. (Eastern Time).

END_OF_DOCUMENT_TOKEN_TO_BE_REPLACED 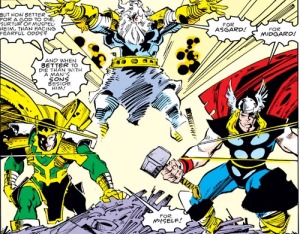 As you’ve seen all week we’ve taken on the daunting task in making a case for what we thought were the greatest single issues in the 75 years of history for the publisher. But how could anybody pick just one? Marvel has been the biggest publisher in the medium for decades, completely revolutionized the medium in it’s inception and has had pretty much every important creator in comics write for them at one point or another. I had to nail my list down to 10 and even that was extraordinarily difficult. In spite of some very well publicized bad decisions both creatively and financially there have been so many great stories by the publisher over time that’s it’s nearly impossible to pick just one. I’m no expert on this subject, I’ve never been too high on certain Marvel staples like Spiderman or Hulk and I’ve in no way come close to reading everything so take my recommendations with a grain of salt. No matter what because of rights issues there are thousands of great Marvel stories for 2001 A Space Odyssey, Star Wars, Conan The Barbarian, GI Joe and others that have no shot of being included in this collection. There are dozens of fantastic runs whose issues didn’t make the cut from me like John Romita’s Spiderman, Lee/Kirby on Journey Into Mystery, Monech on Moon Knight, Moebius doing Silver Surfer, Byrne on Fantastic Four, Gerber’s Howard The Duck, Starlin’s Infinity Trilogy or Warlock work, Windsor Smith’s Weapon X and Engleheart’s Captain America or Avengers to name a few. This is also to say nothing of the many great modern stories that I’m ride or die with like Morrison on New X-Men, Brubaker’s Captain America, Ennis on Punisher, Vaughan on Runaways, Wheedon on Astonishing X-Men, Bendis on Daredevil, Pak on Hulk or Red Skull Incarnate, Remender on Uncanny X-Force, Casey on X-Men, Wells on Spiderman, Warren Ellis on anything  not Avengers related ect. But after much deliberation and changes this is what I could come up with; an X-Men/Claremont heavy list that hit’s most of the strong notes for what’s truly affected my love for Marvel cannon and comics in general. But first let me open with a couple honorable selections that you won’t find in the omnibus but certainly deserved to be read.

END_OF_DOCUMENT_TOKEN_TO_BE_REPLACED

Hello friends, this week at The Banana Stand it’s #Marvel75 week.  As you may already know, this week we’ve all been writing articles about our favorite issues from the past 75 years of Marvel.  I come into this a novice as far as Marvel goes, so while I’m sure there may be more important or significant issues out there, I decided to go with an issue that I really enjoyed and felt I could nominate honestly.  In no way at all do I consider myself qualified to state what issues are “the best”, but this issue is one of my favorites that I’ve read, and I hope you enjoy reading about why I chose it.  END_OF_DOCUMENT_TOKEN_TO_BE_REPLACED

This week at NBC! both Reed and Creighton have shared the issues they think should be included in the Marvel 75th Anniversary Omnibus. These issues include some of the most iconic stories and biggest moments. Today it is my turn to share with you the issue I think must be in the milestone Omnibus. In all honestly I struggled greatly with this. As you know I am a new reader to comics. I did not experience these iconic stories as they happened. I have done my best to go back and read stories I think are important, but there is so much out there to tackle I have not even scratched the surface. So I found myself in a pickle. I could either write about a few very famous issues which we all know are going to be in the omnibus anyway or I could quickly read some great stories suggested by my knowledgable colleagues or I could write about a Marvel story that was meaningful to me. I have chosen to write with my heart. Is Thor God of Thunder #8 the greatest issue in all of Marvel’s 75 years? Of course not. However if you read on I think by the end you will understand why I think it should be included in this book full of incredible stories.

END_OF_DOCUMENT_TOKEN_TO_BE_REPLACED

“To a dedicated readership of gearheads, pot smokers, and art students, ‘Nick Fury, Agent of S.H.I.E.L.D.’ was the apex of an art form.” – Sean Howe, Marvel Comics:  The Untold Story

“No comics artist had ever been so concerned with the whole of the package, from story to layout to production to those covers of his that looked more like posters.  With his diverse talents, Steranko could approach comics on his own terms, and he did so with a vengeance.” – Gerard Jones and Will Jacobs, The Comic Book Heroes

This week the NBC! community will choose the best Marvel Comics issue of the past 75 years to recommend for inclusion in the Marvel 75th Anniversary Omnibus.  This omnibus will include the best issues from Marvel Comics’ rich publishing history, and it would be a shame if the first issue of Jim Steranko’s Nick Fury, Agent of S.H.I.E.L.D. was not included in this historic collection.  Steranko (both writer and artist for this issue, a rarity in the comics industry when this issue was published in 1968) was clearly influenced by The Spirit artist Will Eisner, EC Comics horror artist Bernie Krigstein, and Marvel’s Jack Kirby and Steve Ditko as he crafted a fast, suspenseful issue that begins with exotic intrigue and ends with sad, ironic tragedy.

END_OF_DOCUMENT_TOKEN_TO_BE_REPLACED

As announced yesterday, NBC will be discussing this week what issues we think that Marvel should be including in their upcoming 75th Anniversary Omnibus. When compiling my list, I left off many of the obvious milestones; Amazing Fantasy #15, Fantastic Four #1, Avengers #4 etc. are all pretty much givens for inclusion. Instead I focused on stories which have more personal meaning, as well as historical importance.

1. Fantastic Four #44 by Stan Lee & Jack Kirby (1965): Of all the Stan Lee stories I have read, my favorites remain his run on the Fantastic Four. Similarly, I think that these issues contain the best art Kirby did for Marvel. Also, it was Volume 3 of the Essential collections which partially influenced my decision to start reading comics more regularly once again. For the 75th Anniversary anthology, I would single out #44 for its role in the introduction of the Inhumans. While Medusa was the first Inhuman to debut back in #36, it is this issue in which Lee begins to reveal the larger concept of who these characters are. Reading their initial narrative, I instantly became fascinated with them, especially Crystal. If comics are indeed the myth cycles of the 20th century, these Inhuman tales are an excellent example of that phenomenon at work.
END_OF_DOCUMENT_TOKEN_TO_BE_REPLACED

We want to hear from you, true believer! Tell us what you think are the best stories in Marvel Comics’ 75 years of history, and they’ll have the chance to be printed in this oversized, commemorative omnibus! From 1939’s MARVEL COMICS #1 to 2014’s All-New Marvel NOW!, we want the best of the best. The most iconic stories, the biggest moments and fan-favorites – we want it all!