END_OF_DOCUMENT_TOKEN_TO_BE_REPLACED

Kill Or Be Killed #4

“Brubaker, Phillps, and Breitweiser are back with another installment of their newest gem. Very different than previous books from this team, but filled with the compelling characters and gorgeous art we’ve all come expect. Everyone interested in great comics should be picking this up.”

END_OF_DOCUMENT_TOKEN_TO_BE_REPLACED

Jessica Jones creators Brian Michael Bendis & Michael Gaydos will be returning for an ongoing comics series about the protagonist coming in the fall of 2016 with the latest Marvel Now launch. More details at IGN

At Nothing But Comics, we noticed that the social media network Twitter now allows its users to create polls.   Although the polling feature is somewhat limited (you can only use two options in your polling), we were eager to give it a try.

So we’re asking Twitter users to declare whether or not they will be watching the new Marvel Netflix television series Jessica Jones when it debuts this Friday, November 20th.  Based on the Marvel Comics series Alias by Brian Michael Bendis and Michael Gaydos, the TV series stars Krysten Ritter as Jessica, and David Tennant as the villainous Purple Man.  You can learn more about the series here.

END_OF_DOCUMENT_TOKEN_TO_BE_REPLACED

Writer Brian Michael Bendis is fond of waxing poetic on his early days at Marvel when they were filing for bankruptcy and moving furniture out of their New York offices his first time there. Even the most optimistic of predictions probably couldn’t have anticipated the success he’d have in tandem with the company itself, having gone from being a burgeoning crime comics writer filling in at a dying comics publisher to their most important creator of this century for a company who is now on a yearly streak of owning the international box office with no sings of letting up in the near future. Yet in spite of his many accomplishments on some of the companies most popular series and characters, Bendis greatest legacy will probably be the creation of Jessica Jones and the seminal series he did with artist Michael Gaydos in the earlier 2000’s. Along with his extended Daredevil run, it still represents his greatest work in comics and with the success of the Netflix series, it looks to be his most enduring addition to the Marvel Universe for the time being. Last week, Bendis returned to Jessica Jones with Gaydos after the character had been sidelined for years in her marriage to Luke Cage. Their debut on the new series is an intriguing return to the protagonist that manages to reconcile the current Marvel continuity while staying true to the titles etho’s.

It’s been a weird year for Brian MIchael Bendis as while his Iron Man comics represent some of his best writing in years, Civil War II has been dead in the water, failing to engage fans while appearing to not grab the type of sales bump Marvel had to have anticipated before DC Comics Rebirth took all the air out of the room. This is on top of Marvel studios breaking away from the comics publisher as a whole, thus ending Bendis’s time on the infamous creative committee, the cancellation of his Powers TV series from the Playstation network and a lot of the creative talent he helped bring in moving on from the publisher to focus solely on their work for Image Comics. While he still is one of comics most successful current creative talents, the days of his vision carrying the company towards unmitigated success appear to be firmly in the past at this point in time. The reason to bring back a Jessica Jones comic is clearly obvious with the success of the television series and it makes perfect sense that he’d be the writer for multiple reasons, but it does feel as if it’s coming at a strange lull in the writers career, at least in comparison to the highs we’ve seen from Bendis prior. What a new Jessica Jones series means in that context is yet to be seen but in terms of quality alone, the debut issue is about as good as anybody could of asked for.

Jessica Jones #1 is a comic that feel’s strangely retrograde to the time of the original series creation while squarely in Marvel’s current continuity. Jessica Jones has always existed as a sort of street level every-man proxy for the extraordinary tapestry of Marvel’s fictional comics continuity, observing the superhero community and their many troubles from a distance while bouncing off of them in her personal interactions and that comes back in the series debut. In it, Bendis is bouncing around several mysteries about both Jessica herself and the larger tapestry of post Secret Wars  continuity, but it always remains firmly in the perspective of those outside of it, feeling it’s affects without having any power over it’s outcome. Jessica’s voice is as raw as ever in both tone and perspective, which feels surprisingly refreshing. Since Alias, we’ve had several series try and take the same street level approach to superhero comics and few have worked as well as this issue does. Bendis has a unique understanding of when to apply subtlety with Jessica Jones that’s never fully translated to his more overt superhero work in spite of his best efforts. There is an intuitive naturalism to his writing here that is a welcome change from what we are used to seeing from the writer in recent history. Artist Michael Gaydos hasn’t lost a step since the last time we saw him illustrate the character with his rough and scratchy pencil that works so well for the books P.O.V while Matt Hollingsworth lush color’s continue to stand out among the best in the medium.

While a lot has changed for Marvel & Bendis since they first debuted Jessica Jones, here it feel’s like the book never left in the first place, which is about the best anybody could’ve hoped for.  Alias was ahead of it’s time and considering where Bendis is today, going back may not be a bad idea.

Recently, after Alan left the coffee shop, a mysterious creature warned Brian not to trust Alan…

…but Brian concluded he must have imagined the whole thing… 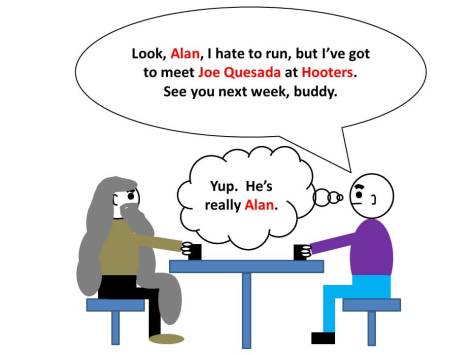 END_OF_DOCUMENT_TOKEN_TO_BE_REPLACED

Recently, after Alan left the coffee shop, a mysterious creature warned Brian not to trust Alan…

…but Brian concluded he must have imagined the whole thing…

END_OF_DOCUMENT_TOKEN_TO_BE_REPLACED

And last week, after Alan left the coffee shop, a mysterious creature warned Brian not to trust Alan…