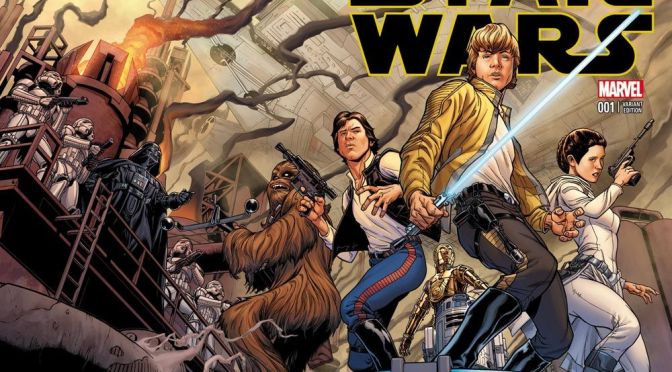 At the beginning of the year, Marvel Comics launched their line of Star Wars comics to immediate sales success and fanfare. Since then, the publisher hasn’t stopped releasing several new ongoing’s, miniseries & crossover’s related to the property to the delight of readers and retailers alike. But more then just being successful sales wise or in satisfying the fans, Marvel created some great comics by letting their creative talent imprint their own styles on the Star Wars mytho’s. Star Wars comics rocked readers everywhere in 2015 with a little something for everybody as you’ll see below.  END_OF_DOCUMENT_TOKEN_TO_BE_REPLACED

END_OF_DOCUMENT_TOKEN_TO_BE_REPLACED

Since Marvel began releasing new Star Wars books after acquiring the license back from Dark Horse Comics, the publisher has done it’s best to give those series to it’s top talent, with some of the most popular and well respected creators in the business working on an array of different Star Wars related comics. But while the majority of the Star Wars lines focuses on the various actors from the original trilogy, Marvel still shined a light on the expanded universe with Kanan The Last Padawan, perhaps the most unique Star Wars book on the stands.

Hardcore comics fans probably won’t recognize the name of series writer Greg Weisman, but while he’s yet to have written an X-Men or Wolverine book like many of his peers on the Star Wars comics, his pedigree is as sound as any for this project. That’s because Weisman has decades of experience in cartoon creation, having helped write and produce many comic adaptations for children’s television in addition to creating the seminal Gargoyles & being a huge part of Star Wars Rebels, the animated television series Kanan is based off of. But what’s best about Kanan isn’t how familiar Weisman writes this story but how singular it feels within the context of the expanded Star Wars universe. Kanan is a former Jedi in training right after the Jedi’s have been wiped out via the empire and he’s forced to take up with thief’s and outcast to avoid capture from the Empire who are looking to kill off the remaining Jedi’s. In that way, Kanan The Last Padawan feels closer to a genre mashup about growing up in crime and poverty then your standard Star Wars comics. That isn’t  a knock on the rest of Marel’s Star Wars line that has been mostly excellent and for all that Kanana isn’t, it is still very much a book based in the same universe as Luke, Leia, Han & Chewbaca. But it also is a personal story that, by existing mostly outside of the Rebel’s versus the Empire conflict, adds a different dimension and shows another side of the Star Wars mytho’s that is as relateable but completely unique from anything else associated with the line of comics.

To Weisman’s eternal credit, he writes Kanan as being complex enough and with an empathy that’s highly endearing. The comic really feels like the story of a kid that’s working to figure out his life as it’s been completely up ended by circumstances out of his control by centering the book on Kanan’s emotional confusion in the center of the action & adventure. Artist Pepe Larraz has a more cartoony manga style that gives the series a certain tone by accentuating the feeling of innocence being lost as Kanan continues to be forced into worst situations. It’s mostly workman like in it’s approach and it rarely goes above that but it feels appropriate for the story and helps to underscore the comic thematically.

While Kanan isn’t like the rest of Star Wars comics that Marvel’s released over the last 6+ months since they’ve started publishing the series again, that turns out to be to it’s benefit. Though Kanan is sharing the same universe as the cast of the original trilogy, his life is completely different and the exploration of that has been both heartfelt and fascinating behind the work of Weisman & Larraz. There’s is a Star Wars tale unlike any other.

There was a time when this was one of the best comics being published, there was a time when it lost it’s luster, then there was a time when it appeared it was getting that back and now it’s just bittersweet to see it end. Through it all Wolverine and The X-Men was always the most heartfelt book out of the big two by a wide margin and Jason Aaron’s final issue encapsulates that greatly. It’s a touching moment as we get to see the kids on graduation day and also years forward in the future getting an idea of how the school had changed them after both one year and and much further into adulthood. More than anything this was a comic about the challenge and reward of positive growth and the final issue is a refreshing cap on that concept. Like any great journey the characters are different people then the ones we were introduced to in the beginning, no small feat for a superhero book, what makes it even better is that they’ve all grown for the better. Flash forwards to students Idie and Quinten as fully mature adults that still have the same personality traits but have molded and refined them for the best while Wolverine appears to truly be transitioned from the lone wolf ninja rebel that he’s been stuck in for decades for the empathetic and wise old educator. Sometimes certain people can completely change the trajectory of who you are just by randomly entering your life. Do Idie and Quentin survive without meeting Wolverine? Does Wolverine become the man he is now without Quentin and Idie? Does Jason Aaron become the writer he is without getting the characters on this book? Do the characters get to mature without him writing it? This comic was never perfect but it was almost that a few times and it was never without it’s center, it’s greatest strength; it’s undying love and heart that bleed out of the pages.