Over the past couple weeks, Nothing But Comics has been providing a variety of coverage on the 2015 New York Comic Con. From the creators to the cosplayers they inspire, we have offered reflections on the different facets of fandom. The last in this series of articles is a compilation of comments from some of the panels attended during the convention.

Coverage of Valiant’s Book of Death and Beyond Panel can be found here & here.

At the Dark Horse Comics Classified Panel, there were a few announcements, but the main pleasure was hearing the creators discuss their craft. These observations included a healthy sense of humor, such as when Matt Kindt was asked what it was like playing the role of both writer and artist on a series. He replied that collaborating with himself was a pleasure, as “most of my deadlines get along.” For his part, Brian Wood offered that he always wants to be enthusiastic about the art in one of his titles. His wish is to be a “fanboy” of it just like any other reader.
END_OF_DOCUMENT_TOKEN_TO_BE_REPLACED 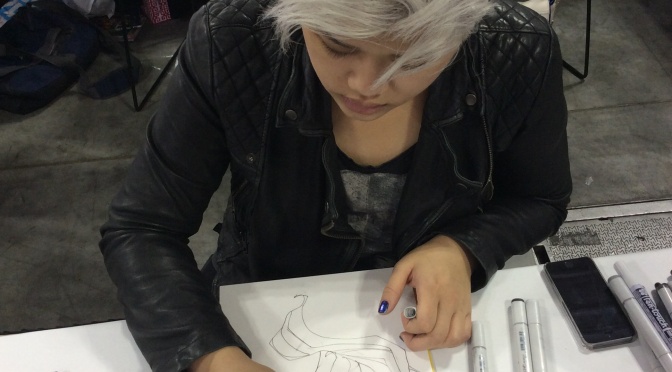 This past weekend, I had an opportunity to speak briefly with artist Annie Wu, during which we discussed her collaboration with writer Matt Fraction on Hawkeye. Previously, I had written about connections between the L.A. Woman story-line and the film The Long Goodbye. Wu confirmed my theory that Fraction based the mentor P.I. character on Eliot Gould’s performance in the movie. She even admitted trying to recreate the same cat food brand which Gould is searching for in the film’s opening seqeunce. She added that Gould was not the only cultural figure to slip into the narrative. The features for the gay couple were based on Issac Hayes and Lou Gossett Jr’s characters on The Rockford Files, a TV detective series from the same period.  Meanwhile, Fraction mixed some horror into the mix by evoking obscure Marvel character Harold H. Harold. Oh, and yes, that reclusive musician was based in part on The Beach Boys’ Brian Wilson. L.A. Woman turned out to be a project which required a fair amount of research.

Yet, we both agreed that was one of the things which made Fraction’s writing so rich. He possesses a wide scope of cultural knowledge so that he can pull in ideas from all sorts of places. In fact, while Wu and I discussed her comics work, we spent an equal amount of time chatting about the musical Hedwig and the Angry Inch, which was the subject of the commission she was drawing for me. This sentiment was echoed the next day at an Image panel. When asked what comic artists influenced him, Wes Craig said that the most important thing for developing artists was to “get their heads out of comics.” Look outside the medium at other art forms. Draw from all over in order to find your own voice. Your work will be richer for it.

In Artists Alley yesterday Joe Keatinge was speaking about how he has the whole story of Shutter mapped out, but is also staying flexible for letting the story evolve organically. A fan asked for an example, and Keatinge cited the character of Cassius, formerly known as Alarm Cat. This fan favorite was originally fated to die early in the series, #3 to be precise. However when Del Duca read the script stating that Alarm Cat died in an explosion she was “heartbroken”. This reaction from his collaborator sparked a change of heart in Keatinge. He revised his plans and sent Cassius off on the fascinating road he’s currently traveling . . . 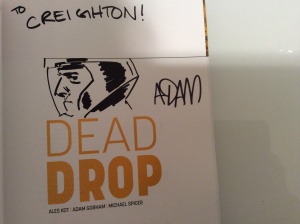 Yesterday Adam Gorham discussed the challenges of working from an Ales Kot script. Kot gave Gorham a lot of leeway with the visuals for the series. For example a two, three page section of #1 simply read: X-O Manowar goes from from A to B doing C along the way.  Such freedom could be intimidating but as readers know, Gorham rose to the occasion with a thrilling, dynamic flair. 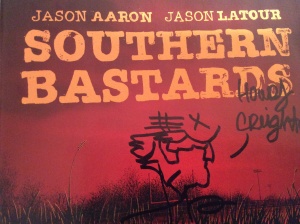 I doubt I was the only reader struck by the art in this week’s installment of Southern Bastards. Latour’s contribution to this series has always been strong, capturing the rural sensibilities of Craw County. This issue though featured a new lushness, especially in the river sequence. I asked Latour about this and he said it was a conscious choice for #11’s protagonist.  Latour explained that it was necessary in order to convey one of the essential elements of Boone’s character.  Boone has rejected town life for what he considers a more authentic “country” lifestyle.  The art needed to reflect this conviction, so that the reader could understand Boone’s deep rooted connection to the natural world. The result is some of the most striking pages of the series too date.