THERE IS ONLY ONE WAY TO DESCRIBE THIS WEEKS MOMENTS, THEY ARE AS…

END_OF_DOCUMENT_TOKEN_TO_BE_REPLACED 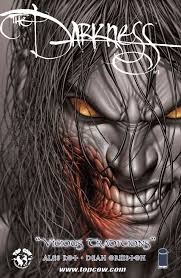 by Alex Kot and Dean Ormston

One of the best parts of seeing Ales Kot grow as a writer has been watching him learn to apply his aesthetic to short single issue or little bottle stories especially when it’s in a long running comics mythology. The Darkness Viscous Traditions continues that streak as Kot flexes a lot of the same muscles that he uses on Zero for this micro story about a nomadic German tribe fighting off a fleet from the Roman Empire. It’s mostly told from the internal monologue of a freshly resurrected Darkness avatar thats fighting on the side of the Visigoths against the Roman Empire. While this is Darkness in name it pretty much stops at a soldier being resurrected so those looking for little snake demons are in for a disappointment. In it’s place we get a short singular story about a small group fighting off a larger week and bloated army. It is brutal and graphic but that serves it’s purpose for the narrative.  Dean Ormston of titles like Judge Dredd and Lucifer is an illustrator I’m not familiar with and he does just fine but this is ultimately a comic where the writers idea is what’s most important. War is disgusting, random, cyclical and it never ends. Maybe you can turn a blind eye to it but that won’t stop it and eventually it will come for you if you’re not paying attention.